Seeing Alliance rankings in an organized, validated way helps to provide context on what you may be already seeing in-game through War Zone combat and gives Alliances a better indication of their activity and power levels. Can you get your Alliance to the top?

Control Point Wars are an Alliance-based feature, so before participating, you must first join an Alliance. Look for this icon in the top-left corner of the HUD while viewing your base:

After that, press “JOIN NOW!” 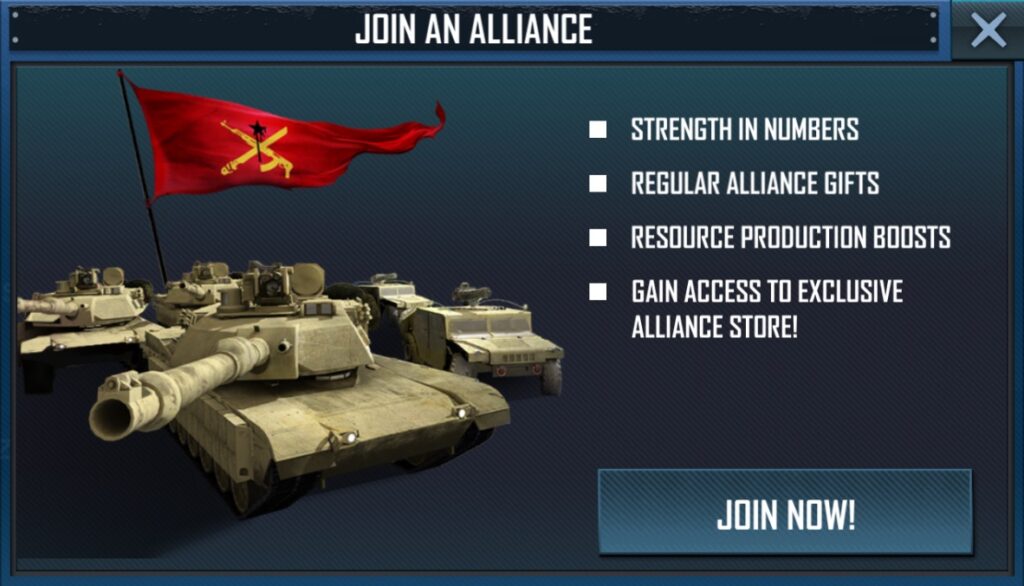 A list of alliances will be available to join. Press the “JOIN” button join any publicly-available Alliance.

After that, say hello to your new Alliance and ask if they take part in Control Point Wars!

Below is an explanation of each score parameter and how it contributes to the final score.

An alliance may be the attacker or defender during a Control Point War. It often takes more effort by an attacker trying to claim a CP war than a defender trying to defend against attackers. For this reason, attack scores count more towards the overall score than defender scores.

The Attack and Defense scores take into account the number of CP War wins an alliance has, their battles score, player participation score, and poor play penalty.

Victories are defined as the number of wins an alliance gets in the time period measured.

Difficulty is derived from the average player level difference of players involved in the CP war. If an alliance consistently down hits, their difficulty score is low. This has a large impact on the final score.

There are quick CP wars and there are long (and costly) CP wars. The Battles Score gives extra points for alliances who consistently fight long and hard to the bitter end, above and beyond the normal amount of battles that alliances typically have every CP war.

It takes a lot of effort (and skill) to organize large numbers of people to come together especially when it’s people across the world with different time zones, work schedules, and availability.

The Players Score is a participation score that gives points for alliances who consistently show up to CP wars with large numbers of players above and beyond the normal amount alliances typically show up with. If you want more points here, show up with more players consistently.

Some alliances like to downhit and grief alliances to gain more points. Others like to have fake wars in an attempt to protect resources. This isn’t gameplay that WCRA rewards in the leaderboard as it is recognized as harmful to the WCRA community.

For this purpose, WCRA has introduced a Poor Play Penalty where this type of gameplay is severely penalized.